Some of the most troublesome issues for people living between frackers and “their” profit are the dishonest “by any means” tactics that frackers use.

As if the attitude of corporate entitlement wasn’t already worrisome enough, we already know frackers like Antero will literally cheat people out of their rights. To explain how, first I’ll have to share a little information for those who aren’t as familiar with fracking as our community is.

Surface rights are really what you think of when you think of property rights. You build your house, dig your garden, walk your dog on the surface of your property.

Complicating this is that traditional wells were not nearly as intrusive. So at the time many of the old leases were drawn up, the concerns just weren’t the same. You could have an old well on your farm without having to lose all the other value of the land your family enjoyed. Traditional wells were drilled vertically, more or less straight down. Horizontal fracturing–or fracking—is new. Frackers drill down and then over by as much as a mile, trying to split apart layers of earth to get to shale gas. The costs and risks of these operations are socialized primarily on local populations. This includes not only clean up costs, but also health impacts like the low birthweights that occur near fracking operations—and the long-term healthcare costs families pay when trying to deal with the consequences.

So… if someone severed the mineral rights from your property in the past—whether it was your own great great great grandfather or just a random former owner—there’s not a whole lot you can do but cry. A fracker like Antero wanting to set up a drilling rig or pump station in your yard, your horse pasture, your creek, your hunting property, or essentially wherever they like… that’s often difficult to oppose. Your surface rights don’t adequately protect you, because this is a new process, and bought-off legislators are representing extraction companies–not you.

But our state in particular faces unusual challenges. One challenge is that we’ve been victimized by Resource Barons for generations, so our state and people are impoverished already. That means it doesn’t cost very much to buy our politicians, because most regular people can’t afford to . Heck 63% of Americans don’t have enough savings to cover a $500 emergency, much less donate a lot of money to politicians.

And even if we had money to donate, studies show our influence on policy is about equal to zero. (This is why we need to get the money out, and vote for people who will represent YOU.)

In addition to that, though, WV had an earlier oil boom, so surface and mineral rights were sometimes severed generations ago. So if your great great great grandpa passed the rights down to be split among his six kids, and then it passed to the next generation, split among 16, etc., you can end up with people owning small fractions of mineral rights interests. That means tracking down who owns the mineral rights in order to have those individuals sign a lease or lease modification requires work on the part of the Resource Barons.

The issue, as you might guess, is that Antero and other modern extractors would rather not have to do that all work in order to legally acquire the leases. So… why be legal about it? They can pocket more if they don’t have to track down the 86 heirs and get each one to sign. These huge companies based out-of-state just don’t have the same values we do.

In those situations, frackers have a few easy (and dishonest) options to simply steal the rights they want.

Two Ways Antero Will Frack You Over

1. Antero lies and falsely claims the heirs are not findable

Scott Windom, a local (Ritchie County) attorney, told me about such a case that occurred in Doddridge County:

I represented an “unknown, missing or abandoning heir.” She was not only NOT unknown, it was an uncommon name and there was only one assessment with that last name in that district.

I got her address from the tax rolls and mailed her a letter. She called me back and sent me the letter that Antero had sent her months before when she told them she didn’t want to lease. They had filed a fraudulent affidavit saying they couldn’t find her!

So, that’s what they do when you have an uncommon name. If you tell them you don’t want to sell, they’ll simply claim they couldn’t find you.

If you have a more common name, the tactics are different.

2. Antero lies and falsely claims you are an heir

This one relates my family’s personal experience.

In June of last year, my husband Alan Smith received a correspondence from Antero offering him $250 to sign a lease modification and sign a new lease for a mineral interest they claim he’d inherited near Gnat’s Run in Ritchie County.

Their cover letter read in part, “We have concluded that you all have inherited a mineral interest from Thelma Dale Jones Smith.” There was also a list of 11 named heirs, about half of whom were surnamed Smith. The letter they sent him closed by stating that the offer terminated in 20 days from the letter’s date; May 26, 2015. So there is a deadline—sign immediately, or you’ll lose $250!

My husband inherited no such interests, however. His brother’s name was not on that list of heirs. His father and grandfather have never owned mineral rights in Ritchie or elsewhere—nor had they died—and we know of no one in his family named Thelma Dale Jones Smith.

Antero included no legal justification for their conclusion that my husband was the correct Alan E Smith, other than the fact that the name matched… sorta. As you will see in the documents below, the spelling of my husband’s name is different than the proper heir’s name. In parts of the document, Antero has spelled it “Alan,” but the rightful owner of those interests is “Allen.” So in some places in the documents, Antero simply struck out the name ALLEN and wrote in ALAN.

So without explaining why they thought my husband was the correct person—and without asking him to confirm that he is—they offered him $250 to sign away someone’s rights, and begin collecting 15% royalty on the new lease, while specifying in fine print that were there some mistake, he would be liable for adverse claims.  It seemed they were trying to acquire the legal appearance that they had a proper lease/lease modification, without having to actually perform due diligence to identify the real legal heir. Or, perhaps as in Mr. Windom’s case above, they did identify the proper heir, but that heir turned them down.

But why let little details like following legal requirements stop you?

These documents seem so dishonest. It seemed to us as if they were trying to make it appear to be a notification of inheritance. Nowhere did they ask if he was the right person! In different family circumstances, we could have been taken in by that deceptive language.  And this area is not wealthy. Some people would be so relieved at the offer of $250, that they would have believed Antero without investigation. Why look a gift horse in the mouth?

We presume Antero offered money to the other individuals listed in the letter, but were they even the right people… or are they just random local people who were fooled by Antero? Is Antero developing land it has no right to, by simply making local people liable for their dishonesty?

Pray that current WV AG Patrick Morrisey is voted out of office, and we may be able to have this investigated. Carpetbagger Morrisey gutted consumer protections in WV.

When I contacted an attorney about this apparent scam, it got worse. The attorney informed me:

“This is a modification of an existing lease on one 73 acre tract plus a new lease on another 200 acre tract. Far from being a better deal than they have offered before, the modification offer is their usual low ball offer, and the lease is probably an incredibly low-ball offer. I say ‘probably’ because in order to be sure I would have to know the share of the 200 acres owned by the proper Mr. Smith. If he only owned a 1/200th share (because there are so many total heirs (of which the 11 listed are only a few through one lineage)) then the signing bonus offer is only 1/4th to 1/10th of what he could get. If he owned more than that, it is outrageously low ball.”

So even had we been the correct inheritors, it was likely not even a fair offer.

I repeatedly tried to phone the contact landman “Brad Votaw” at the number provided in the letter, however the call wouldn’t connect. When I tried looking the number up online, it was the number to what appears to be a random Clarksburg business.

BONUS: Even when (if?) extractors legally acquire a lease to develop rights, they still frack you over.

Do you know how bad EQT is screwing oil and gas owners? Let me show you. A client allowed me to share this statement which shows that EQT is taking more than 91.5% of the royalty for expenses. This is not a working interest owner, this person gets a 1/8 royalty. EQT gets 87.5% of the revenue and then takes an additional 91.5% of the royalty. 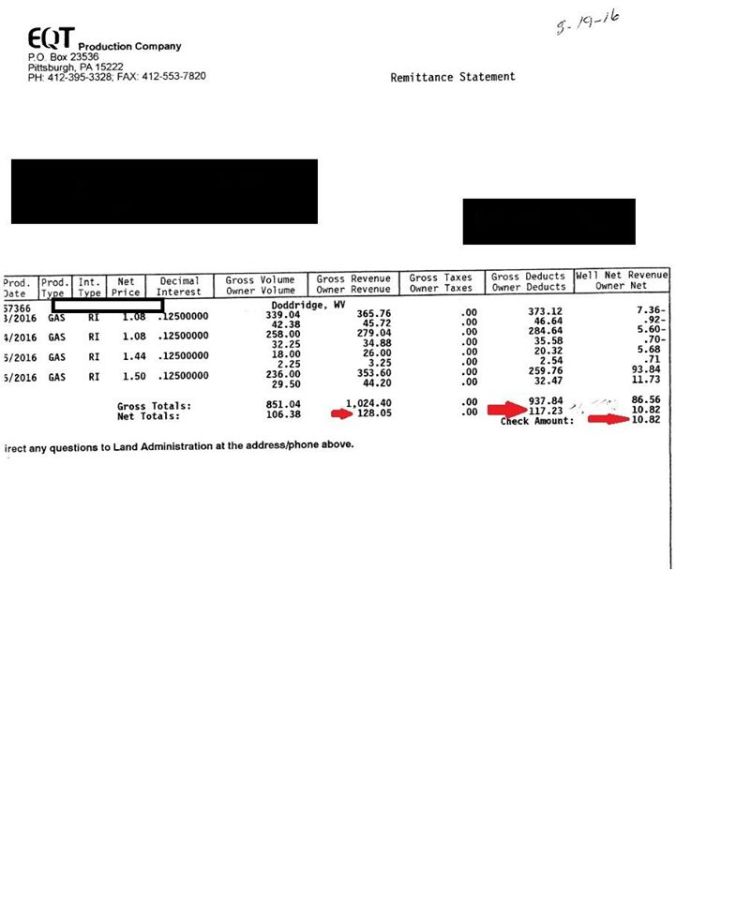 And to add insult to injury (or perhaps injury to insult), Mr. Windom explained that due to all these “deductions,” his client “actually owed EQT for the first two months!”

Not getting paid the royalties you have been promised is painfully common. But politicians are getting paid, so it’s all good, right? …. RIGHT?!

EQT and Antero are among WV’s top five oil and gas violators.

12 thoughts on “Fracking Thieves and Liars”