The American Federation of Teachers of West Virginia has endorsed Lissa Lucas for WV House of Delegates in District 7.

West Virginia teachers and school service personnel launched a nationwide movement with their historic strike over public employee pay and healthcare. They occupied the Capitol and gained better pay and promises for a healthcare fix… not just for themselves, but for all public employees.

The national media has recognized that this movement has been powered by both conservative and progressive citizens who are tired of seeing corporations come first, and voters come last.

“The strike worked because teachers and service personnel all joined together to demand better, no matter their party,” says Lissa. “They really showed how much we can accomplish if we unify. It’s one of the reasons I’m so proud to have received the AFT endorsement.”

Achieving a 5% raise and a freeze for PEIA hikes was an amazing win that has clearly motivated teachers across the country. But it is NOT the end of the fight to make sure teachers and public employees receive fair compensation, and that our schools are properly funded. And it comes nowhere near fixing the terrible service PEIA is providing.

Not familiar? See a video of the PEIA listening tour stop in Doddridge County in order to to hear teachers and service personnel describing in detail the difficulties they face trying to get care. [This two hour video covers the whole meeting at Doddridge High.]

“I’ve heard over and over again from teachers and school service personnel about how angry they are that the same politicians who fought the 5% raises tooth and nail, those same politicians afterward issued statements trying to taking credit for the vote teachers forced them to make,” Lissa says. “It’d be far better for them if they just took responsibility, admitted they were wrong, and apologized. I mean, teachers know that legislators all voted for the raises in the end. But the question for them is how hard was it to get their representatives to listen? The dishonesty of trying to claim they were with the strikers all along has them hopping mad, and I can’t blame them. It’s an insult to their intelligence, but these elected officials are convinced that people won’t remember, and that there will be no consequences to their actions. They think they’re untouchable.”

“I shouldn’t have to point out that, despite how it may seem in hindsight, the raise teachers, service personnel, and public employees won wasn’t an inevitable outcome—not until strikers MADE it inevitable by sticking together and demanding better. They fought; they risked. They spent money driving to Charleston every day. They yelled their voices hoarse,” Lissa points out. “They shouldn’t have to do that to get legislators to listen.”

Teachers and other public employees have already started showing their power at the ballot box by ousting relentlessly anti-ed Senator Karnes in the primary.

“It wasn’t just that Hamilton won. It’s that he won in a landslide,” Rupp said. “It means you can be a moderate Republican who’s willing to compromise…

Lissa knows it takes people of conscience and integrity from both ends of the political spectrum to hold elected officials accountable for representing all of us.

“In that district, they now have two pro education candidates—one Republican and one Democrat—to choose from come fall. That was beautiful thing, what teachers did there,” Lissa says. “And that’s what we need all over this state. Our legislators, no matter their party, have got to be focused on turning things around, not kicking the can down the road so they can prioritize their corporate donors yet again.”

But… at the same time legislators were claiming they had no money for teacher raises, they were still trying trying to give corporations an inventory tax break of $141 million.

The underlying problem, Lissa points out, is that legislators who are taking oil and gas money are putting their corporate campaign donors first, over regular people. So, while teachers were chanting “tax that gas,” paid-off legislators refused to even debate raising severance to help fund raises and PEIA, and they repeatedly blocked a severance tax rate hike from coming to the floor.

To be clear, they didn’t block it because they had more pressing business. In fact, one day the legislature spent 20 minutes debating opossums, while they should have been discussing teacher and public employee pay.

“It’s mindblowing to me that we have legislators who care more about lobbyists and corporate PAC campaign donors than about the people. My campaign money comes from regular people, not corporate PACs,” Lissa says. “The average donation to my campaign hovers around $30. That’s why I’m not afraid to demand we raise severance. Heck, these companies are willing to go to the expense of drilling in the arctic. Raising WV’s low severance to meet the rates of other energy producing states like Texas is not going to drive them away. We have what they want; they’ll come. But we have to make sure regular WVians benefit. We should have a state where regular people are rewarded for their hard work with good pay and benefits. Teachers shouldn’t have to buy classroom supplies from their own pockets. ” 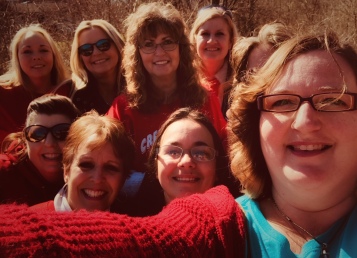 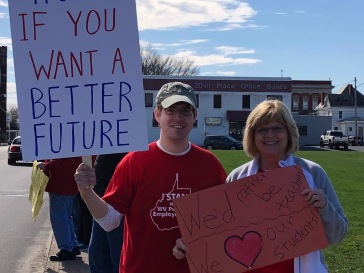 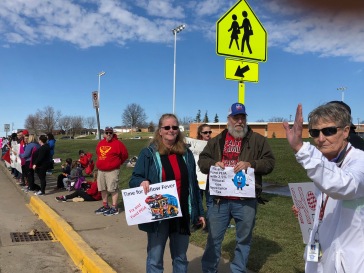 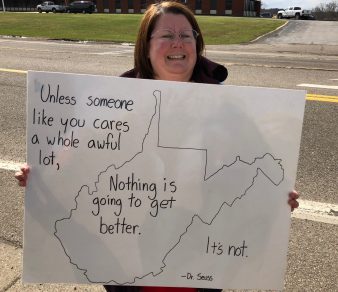 Even after the hard-won raises this last year, WV is still in near-last-place for teacher compensation.

“As far as I’m concerned, to fix PEIA and set up future raises on a reasonable schedule, there are a number of funding options. I’m ready to look at them all,” Lissa explains, “including raising severance tax (especially on gas that is exported out-of-state), legalizing cannabis, and—something I don’t hear raised too often—imposing an excess acreage tax on corporate out-of-state property owners that own thousands of acres.”

Just 25 property owners possess more than 20% of the property in our state, and in some cases pay almost nothing in property taxes.

Yet all that money is being left on the table by politicians getting campaign donations from corporate coffers.

While so many legislators are bending over backward to boost the corporate bottom line, hardworking West Virginians in those districts have no one advocating for them.

“My opponent even sponsored a bill to allow corporations to come onto your property without permission to see if there’s any land there they might want to seize for a pipeline. Meanwhile, we have teachers so desperate for supplies that they have to pay for classroom materials out of their own underpaid pockets, and they have to spend hours trying to get PEIA to cover benefits that shouldn’t take a fight—and all while premiums are skyrocketing. That’s not right. Helping wealthy corporations and boosting shareholder dividends isn’t what we should be focusing on when educator pay is so low we can’t even fill 700 positions. We need better priorities.”

This is why what WV teachers and school personnel do at the ballot box this fall will be so crucial. Will they say ‘enough is enough’? Will they stand together and demand better of both parties?

Or will resource extraction companies continue to dominate our politics and cart our wealth out of state, while hard working West Virginians are ignored?

Planning for a brighter future for WV

Lissa believes that the state has to finally start recognizing the false dichotomy being pushed by lobbyists. “Those talking points are all the bought politicians are hearing at their fancy dinners and galas. That’s why we have to fight for a government that doesn’t sacrifice our communities and our schools at the corporate altar,” she says. “Regular people and West Virginia families have to be our priority.”

Her message is clearly resonating. Lissa actually has the backing of groups that might normally be at odds, including both coal miners AND environmentalists.

And now she has the backing of teachers as well.

“I’m so honored to have teachers behind me, teachers of both parties. And it’s my hope that teachers, school service personnel, and public employees will help shine a light for other West Virginians on following the corporate campaign money, because sadly, the words of many of our current legislators just don’t match their deeds. They’ll fight you tooth and nail, and then claim they were with you all the time, betting on the fact that you won’t remember at the ballot box when it counts! But let me tell you, teachers—whether conservative, moderate, or liberal—are paying attention this year, and my guess is that they’ll be teaching some legislators a very hard lesson come November.”