Outreach, and what it’s not 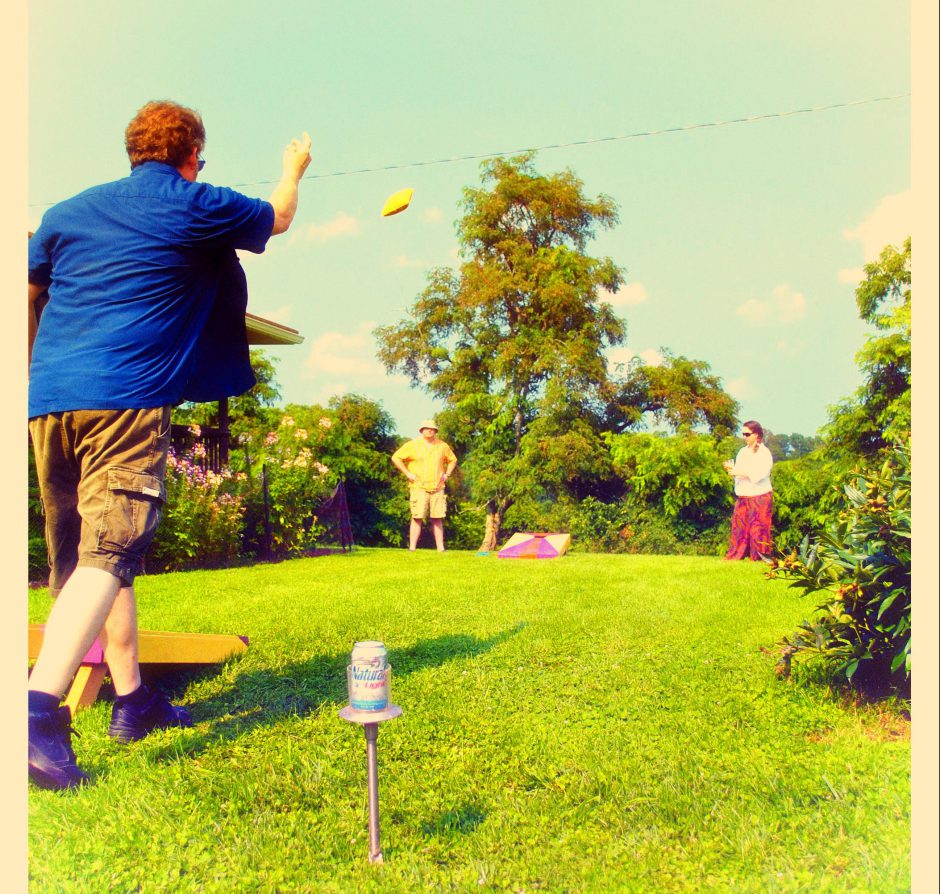 Living in a rural state like West Virginia has its advantages.

Our state is “Wild and Wonderful”: what hasn’t been seized or destroyed for profit is heart-rendingly beautiful. Many of us live every day with views that other people would pay a mint for on vacation. If your house is secluded enough, there’s practically hunting off the front porch. And if you can’t fish on your property, you probably don’t have too far to drive, no matter where you are. There are morels, blackberries, pawpaws, persimmons, ginseng, and ramps, to name a few native luxuries.

But there are other advantages: the people.

Yeah, I get it. A lot of you out there think it must be miserable here, a drop of blue in a sea of red.

If you think that, you’re wrong. I love the people here. Come to a garden party in a small town…

Or come to a festival in the wild WV highlands. Try a county fair. A ramp dinner… an ice cream social.

You have the young and hip, the cool bikers, the bonsai gardeners, retired folks, teachers, people of many different religions (and the non-religious), librarians, artists, old hippies, manual laborers, business owners, teachers, families, old, young… everyone. 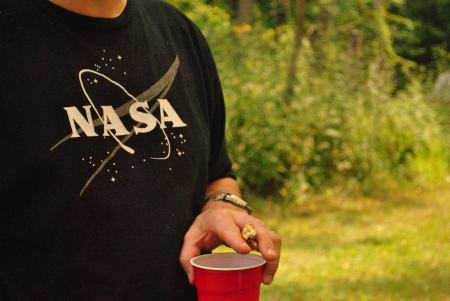 And we’re all enjoying pretzels and beer together while listening to folks pick on the guitar.

In the summer, we’re sitting in the shade of the porch, or cooling off in the creek. 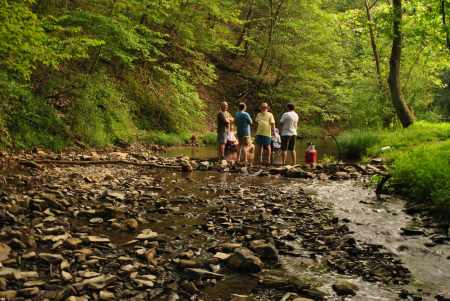 But even politically, we agree on a lot of things:

In fact, in this “red” state, 70% of West Virginians are willing to pay higher taxes to maintain funding for public schools, public safety, and infrastructure. That’s in a state where nearly 20% of people live below the poverty line.

We’re not who you think we are.

If we want to change the outcome next election, please stop attacking the people you want to persuade. That’s not outreach.  There are more effective ways to talk to people.

The rote response to asking for this civility is often the accusatory: “Why should I spare a bunch of racists?!!”

Well… sigh. That’s not what I’m suggesting. Do continue to call out racism. Just understand that when you tar whole states or regions with the same broad brush, you’re not reaching the people who need to hear they’re not forgotten. Instead, you’re allowing wealthy oligarchs to distort your ideals, and financially benefit from the distraction and strife.

When people on the left say of West Virginia and other states that voted for Trump, “You’re stupid,” or “You deserve what you get,”  perhaps you’re echoing pundits you see gloating on TV. Perhaps you’re unthinkingly making snide remarks and repeating the hackneyed cliches of hillbillies, rednecks, and white trash that you imagine pervade Appalachia. Whatever your motivation, you’re definitely spouting the same ugly stereotypes that benefit wealthy oligarchs. You are helping the oligarchy, not yourselves—not your cause.

Because when we hear you say “West Virginia deserves what it gets, ” it’s the same thing we’ve been told for generations. And we’re thinking of our families, our neighbors—we think of each other.

When you say these things, you’re not just insulting some archetype you see on the boob tube, or the dirty politicians we’ve been fighting to disentangle from our state government.  No, we’re real people out here. You’re talking to us—and I emphasize US. Because as much as I think Trump was the wrong choice,  a terrible choice, I’m a West Virginian, and I’ll stand up for my fellow West Virginians. I’ll stand up for my friends, because they would stand up for me—and have.

“We should keep reminding them of the white trash disgrace they are,” someone ranted at me the other day. He was talking about folks in WV, all of whom he considered subhuman. To him, this whole state “failed the human test” and so we deserve what we get.

You understand what that means, what it implies. If you can bear it, feel free to read the whole FB conversation, which is quite ugly. See if it helps you understand how the Democrats’ message is getting terribly distorted as it filters through here.

Outreach and what it’s not (PDF)

Understand that these are the same stereotypes that allow Resource Barons to economically exploit Appalachians.

Economic exploitation will always be the favored tool of the oligarchy.

Why? Because the wealthy will act to make sure their money continues to equal political power. And when wealthy people who see themselves as “good guys”—and don’t they all?—are confronted with the reality that what they’re doing hurts people, the cognitive dissonance causes them to look for justifications. One that has worked well to exploit the people in this region is that we’re all white trash hillbillies here in WV that deserve what we get.

“John Doe,” that self-proclaimed dedicated liberal, won’t be standing up for coal miner pensions anytime soon. Instead, his raging at this state is playing right into the hands of Coal Barons.

Don’t allow yourselves to be deluded by that line of thinking. I’m a West Virginian and a progressive. I know that MTR and fracking cost us more, far more, than we get in return. But when you gloat that  “it’s pretty awesome” people in red states like WV will be losing their healthcare, you’re not reaching out. You’re just confirming what wealthy Extraction Barons are saying to Trump voters: “They’re killing your jobs and they don’t care about you.”

Here’s what we can agree on: Transitioning away from fossil fuels first, and only later trying to figure out how to help miners, pipeliners, oil/gas landmen is a little like suggesting it’s a good idea to repeal the Affordable Care Act, but only figuring out how to replace it with something “better” a few years from now, maybe. I don’t want that for anyone.

Right away, we must create a system to help these hard workers take care of their families, and give them access to good jobs and affordable health care. It’s a matter of priorities. We should not continue to fund corporate welfare queens with our tax dollars and lives while hard working people are barely getting by.

If we prioritize helping the workers and communities first, then the only obstacle to the transition will be the billionaire Resource Barons and their political mouthpieces. They won’t have an army of folks behind them—that you’ve helped them recruit—who are just trying to protect our families, our communities, and our way of life.

So let’s do what’s reasonable and just, and make them pay a fair share to uplift the communities they’ve destroyed. Let’s stop handing money to the Resource Barons with the expectation that with just a little more money, they’ll finally have enough and will stop exploiting the rest of us.

That will never happen.

Our priority should be the regular taxpayer. Our people. Our communities. All of us, including extraction workers, need representatives that will work to fix what ails this country. There is a HUGE difference between extraction workers and Extraction Barons. When you attack the workers, you help the Barons.

Setting us against one another is what the industry wants; it’s how they get their money and shift attention away from their long con.

Our shared goal is social, environmental, and economic justice. It’s equality, and equality of opportunity. It’s getting to a place where hard work results in good pay and a reasonable standard of living. It’s making sure our taxes are not just funneled to the rich. It’s leaving a clean, beautiful world for our children and grandchildren. It’s helping people to recognize that we can’t keep paying all the costs while getting none of the benefits.

We can firmly stand up for progressive policies, and reach out to our friends and neighbors at the same time.

So before you tell us—I say US, because I’m a West Virginian and I stand with my fellow West Virginians—that we “deserve what we get,” take a moment to ask yourself: Are you furthering progressive causes or hindering them?

Are you helping The People… or the Oligarchs?

Preaching to the choir is not outreach. Come talk to us.

10 thoughts on “Outreach, and what it’s not”